Since moving to the UK, I have been involved in running CYGNA. The network was established in June 2014  as a combined initiative of Argyro Avgoustaki, Linn Eleanor Zhang, and Anne-Wil Harzing, later joined by Shasha Zhao. The name CYGNA derives from the female version of the Latin word for SWAN (Supporting Women in Academia Network). The main objective of the group is to promote interaction among female academics based in the London area and to provide a forum for learning, support, and networking.

We typically hold four or five meetings a year with a mix of presentations and informal discussions. A quick overview of the topics covered can be found here. Yearly meeting overviews with pictures can be found here. In February 2018, I have started to write up our meetings as blogposts so from February till June 2018 you'll find reports on a mix of recent and older CYGNA meetings on my blog. A full list of the blogposts of our mid 2014 to mid 2018 meetings can be found at CYGNA: Resource collection for the summer holidays.

Building an academic career in Australia

As some of you are aware I have worked in Australia (Universty of Melbourne) for a long time, moving to Melbourne to take up a position as Senior Lecturer, getting internal promotions to Associate Professor and Professor, and taking on roles such as Director of a large PhD programme, Assistant Dean Research Higher Degrees, and Associate Dean Research. I also acted as Head of the International Business group for quite a while. In that capacity I recruited three new young academics in the group in the late 2000s, who all happened to be female.

As one of the women (Tine Koehler) had blonde hair, the second (Sachiko Yamao) straight mid-length black hair and the third (Helen Hu) long wavy black hair, I called them my angels, after Charlie's Angels, a female detectives series which was popular during my early teens. Ok, its plots were ridiculous and the skimpy gowns and swimming costumes might not have been essential to the story. However, as one of the IMD reviewers said: "They were independent, intelligent, employed women who worked well together and supported one another", not a bad role model to have as a girl [or a CYGNA member for that matter].

My colleagues were not only angels, but went on to have very successful academic careers. As you can read below, Sachiko - now Associate Professor at Keio University Japan - and Helen visited our CYGNA group in 2015 and 2016 and I am hoping Tine can join us too at some stage. 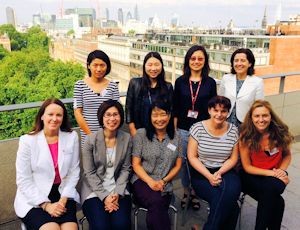 Sachiko Yamao, presented about the Challenges and Opportunities of Working & Researching Down-under [presentation download]. Her presentation [see sample below] is essential viewing for junior academics considering the big move. We also had a plenary discussion on finding your first job in different countries. In this context you might also enjoy reading about Anne-Wil's experiences of working in the UK [Bradford] and Australia [Melbourne]. 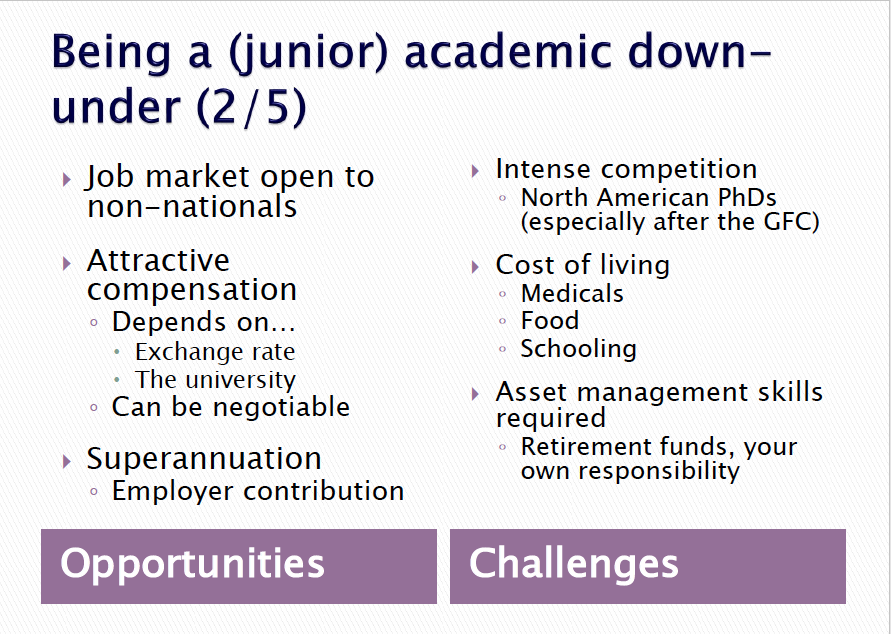 At our September meeting, as "traditional" held at Middlesex University, Helen Hu presented her reflections on applying for promotion to Associate Professor. She had just submitted her application, which at the University of Melbourne consists of a 20-page argued case. A major job in itself. We were all impressed by her mature reflections, emphasis on collaboration, seeing the best in people, and taking a long-term perspective.

I was particularly proud of her, as I had originally argued the case for her appointment 8 years earlier against another - male - applicant, who was favoured by the rest of the panel. The University of Melbourne promotion panel clearly agreed as she got the good news of her promotion soon afterwards. As her presentation Building an academic career - experiences from down-under, was fairly personal, Helen preferred not to make it publicly available, but I am sure she would be happy to share her experiences if you write to her.

At this meeting, I was due to do a trial run of my Middlesex Inaugural Lecture: Babel in Business: The Role of Language in International Business, but woke up very sick that morning. Ironically, it is the only CYGNA meeting ever that I missed. Linn Zhang (Loughborough University, London) did a brilliant job in a last-minute reorganisation of this meeting, doing so in the underground on her way to the venue at King's College London.

Linn printed my slides and turned the session in a round-table discussion with all the academics who had come to hear me speak, working themselves in the field of language in IB. I actually think the event was probably all the nicer for it :-) Linn, Guro and Ting went out in London afterwards and sent me a lovely picture of them having a great time. 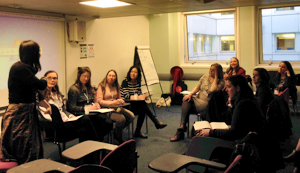 In the second part of the meeting, our two "French" participants (I say "French", because one is German and the other American) gave us a very interesting presentation about women academics in France.

I was sorry to miss Cordula - who was one of my country collaborators on the Language effects in international mail surveys project, but Cordula has become a regular attendee, flying in from Toulouse for our meetings. Luckily enough I was able to meet Betty at the 2016 EURAM conference, where I gave a presentation on Language in Academia.