In spite of my frequent research on rankings (To rank or not to rank) over the years, I am not a fan of rankings, even less so of rankings of individual academics. These rankings only ever capture a fraction of what is important in academic jobs, typically focusing on publications and/or citations only. They also reinforce the idea that scientific research is all about individual excellence (see here on why the myth of the "lone genius" is dangerous).

Recently, I have argued that our academic performance appraisal systems need to change to incorporate what academics do to support their (junior) colleagues. You can watch the entire YouTube video here. You can also read more about my views on this in Leading with Kindness. 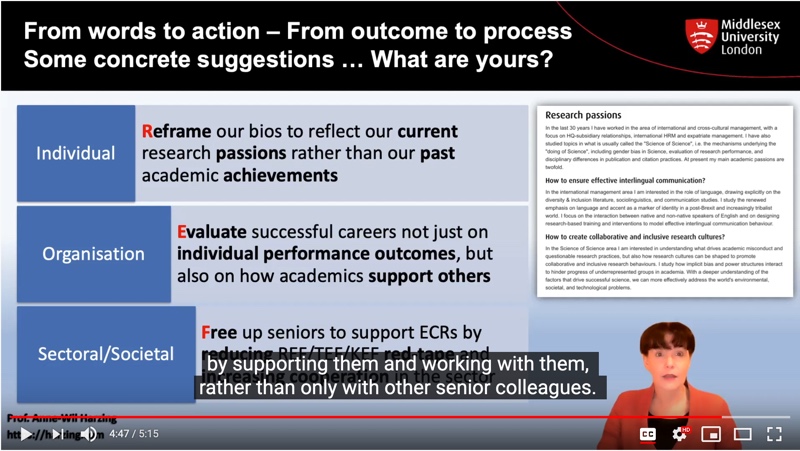 That said, I don't think there is any academic who is completely free of "academic vanity"; I am certainly not. So when two academic friends pointed out to me that I was highly ranked in a citation ranking based on Scopus data, I couldn't help myself looking.

The ranking also removed self-citations, which varied quite dramatically across the author-set; mine were 4.32% - well below the average of 13.74% - but for some authors they were above 80%. If you want to play with the data yourself, all spreadsheets can be freely downloaded here.

Creating a ranking in Business & Management

I then removed any academics that published less than 70% of their work in Economics & Business. Most of the academics removed in this process were either working in Social Psychology or in Operations Research/Statistics. These are both fields that are closely related to Economics & Business, but not generally seen as being core to the discipline. 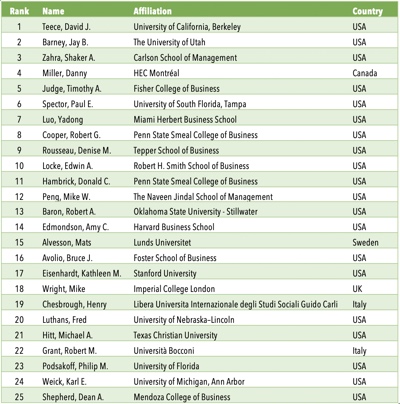 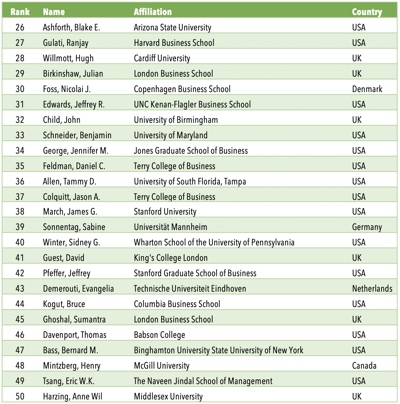 Above, I have reproduced the resulting top-50 worldwide in Business & Management. I was very pleased to see that I just made it to the top-50. As is immediately evident, most highly cited researchers (35 out of the top-50) are affiliated with US institutions. Of the remaining 15, seven (incl. myself) were affiliated with UK institutions, with two each in Canada and Italy, and one each in Sweden, Denmark, Germany, and the Netherlands. The top of the Business & Management field is clearly dominated by Anglophone scholars, part of which is no doubt a reflection of the dominance of the English language (see also: English as a Lingua Franca in Academia).

Please note that the main ranking looked at the academics' entire career, not just the last 10 years (as in the Clarivate Essential Science Indicators). As a result, most of the academics in the top-50 tend to be in the later stages of their career, with many of them being emeritus or emerita professors. Sadly, a number of the academics in this list have passed away, including two of the UK scholars in the top-50, Mike Wright and Sumantra Ghoshal (see also: Writing laudations or obituaries?).

The authors also created a ranking looking only at 2019 data, the most recent year in their analysis. Comparing the two rankings shows that there is a lot of stability in the top-25, only one of the academics in the all-career top-25 (Cooper) has dropped out of the top-50 for 2019 citations only, though he is still ranked at #51. However, fifteen academics between 26-50 have dropped out the top-50. This includes me, although I am still ranked #53. 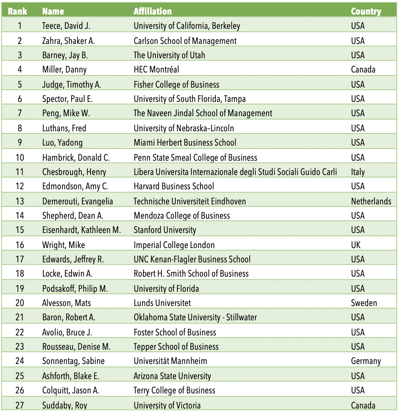 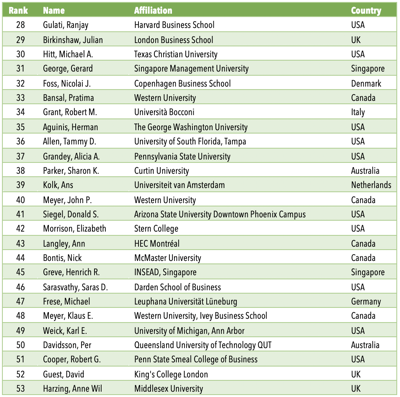 The number of women included in the top-50 has risen from eight to thirteen, six of which are affiliated with institutions outside the USA. At 26%, the percentage of women in the top-50 is below the proportion of female professors in the USA (34.3%), but above their representation in Europe (23.7%)