Since founding CYGNA in 2014 we have had 30 physical meetings in London-based universities, but when COVID-19 hit, we moved the meetings online. We alternate topics related to gender in academia with academic skills development. But in December - at our 44th meeting - it was time for a purely fun meeting with our yearly Christmas celebration.

We had 29 participants, 27 of which are shown above. Given that we met in the afternoon instead of an early morning session, we missed our Asia-Pacific members for whom it was the middle of the night. We had more UK participants than in previous meetings, but even so more than a third of the participants came from outside the UK. Two CYGNA members attended for the first time: Michela Vecchi and Saranzaya Manalsuren.

Shasha Zhao had prepared a Secret Santa game. Each of us had to - anonymously - share answers to one or more of these three questions:

During the meeting, we all introduced ourselves by sharing stories of our childhood ambitions. After that we took turns to pick one answer we found particularly interesting. The ‘author’ of the secret Santa message then revealed herself and said a few more words about this. In some cases, pictures were shown to illustrate the story.

It was great fun and we all enjoyed getting to know a bit more about each others' lives beyond work. As a researcher, I also had great fun "analysing" the answers to see whether any broader patterns revealed themselves. 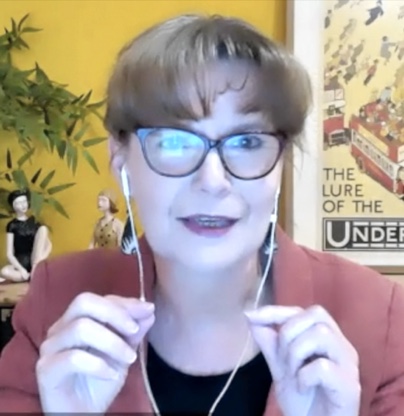 What did you want to be as a child?

None of us had childhood dreams about wanting to be a (management) academic. However, about a dozen of us had childhood ambitions that were not far away from this such as being a teacher, writer, researcher, psychologist, cartographer, or detective, librarian and analyst (my own choice).

Another dozen of us wanted to be (performing) artists. There were quite a few prospective dancers, singers, and actors among us, as well as a musician, a film director, and a painter. Interestingly, the same artistic pattern revealed itself last year (see CYGNA: REF and Christmas during a pandemic) with a largely different group of CYGNA members.

Then again, maybe the arts and research are not so different after all: both are about choosing your own path and realising your own passions and visions. And in our teaching we can certainly do with some of the skills needed in the performing arts. Fortunately, when compared with artists, academics are (still) blessed with a lot more job security and higher salaries!

The remaining dozen saw their futures in established professional fields such as lawyers, doctors, vetinarians, whereas others chose less conventional options such as astronaut, pearl diver, firewoman, or carpenter. Not a lot of traditional girlie ambitions there, though we had one stewardess, one fairy and one CYGNA member who was kissing frogs, hoping to find a prince.

Something interesting about you?

We were also asked to share something interesting about ourselves that most people would not know about us. The answers were roughly equally divided into previous jobs or studies, hobbies or interests, and personal stories. 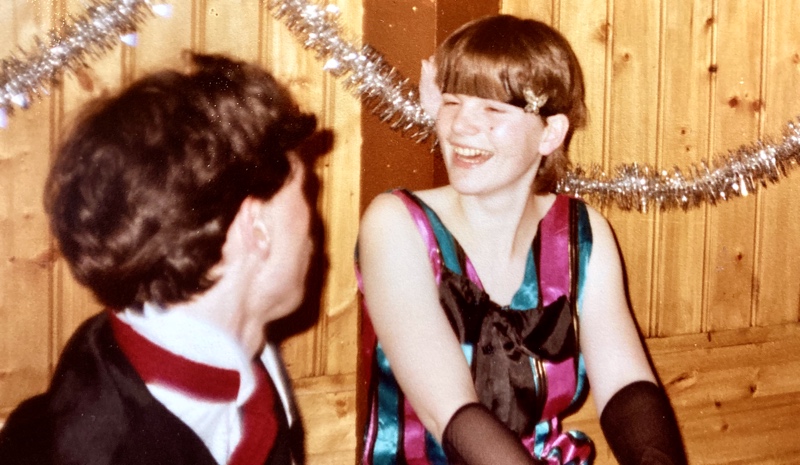 Something fun or memorable about your job?

Responses here were as varied as they were interesting, but they generally fell into three main categories: research, teaching, and positive/negative behaviours in academia. In addition, some of us discovered unexpected new passions in the pandemic period, such as playing with heat-maps and word clouds, and video editing (me).

Research: crying when reading interview quotations, realising every paper is a challenge, meeting a nursery friend as a study participant, learning that even technology is always about people, feeling very attached to one's research topic, participating in a COVID-19 vaccine trial to learn more about research ethics and participant drop-out, learning that Taiwan has an amazing tradition of puppet theatre, and finding one's nationality the unexpected topic of discussion.

Teaching: learning that more materials isn't always better, getting students to try eating (edible) insects, getting to know a lot about cultural differences through class activities, finding students not willing to pronounce one's name, preferring mam instead (see also: How to address your lecturer?), feeling ancient when a student said "you must have been very beautiful when you were young", learning a lot about the underlying messages in movies when using them in teaching, supervising an MBA consultancy about restructuring ICU units in hospital, having students saying they like your teaching because you are different from others, and repeating the same class to the same students a week after the original class.

Negative and positive behaviours in academia

CYGNA members also shared stories of negative and positive behaviour in academia. The negatives included an editor citing his own work repeatedly, Covid-19 very much reinforcing gender disparity in academia with women taking on more of the student (and colleagues) care and men spending more time on research, and learning the importance of trust in academic collaboration the hard way by nearly getting involved with someone who committed research fraud.

On a positive note one member realised that if a woman is the first contributor in a meeting, the conversation flow is more equitable, with ideas shared and discussed in parity, a great practical tip we can all apply by speaking up first in a meeting. Another discovered a book about the power of passion and perseverance. A third received a personal thank-you before and after doing a review from the editor. This editor believed it was important to express appreciation to all their reviewers, and felt these small things counted for building a positive culture in academia. I couldn't agree more (see also Changing academic culture: one email at a time...).

A more senior member shared a reflection that is worth reproducing in full. Again, this his absolutely been my experience too!

The really good people in academia are never snobbish or reluctant to respond/give up their time even if they are 'big shots' and you are not *yet*. It's only the ones wishing or thinking they are better than they actually are who play the power games. This has been true throughout my 22 years in academia and I always share this with ECR colleagues when they are frustrated or overly impressed by big academic egos.

My own story: becoming a millionaire (yes really!)

I was surprised at how little conferences featured in the fun and memorable stories. However one member did recall a hotel room ceiling almost falling down on her head. Interestingly this lead to easy networking at the conference. I guess it broke the ice. My own story was conference-related too. I became a millionaire at the EIBA conference in December 1994 (see picture above). Yes really! I won an award for the best PhD proposal and received a brown envelope stuffed full of banknotes (12 million Polish złoty), just two weeks before they took four zeroes of the currency.

I remember opening the envelope on the toilet and wondering whether I would ever again see so much money in my life. Exchange controls prevented me from taking the money out of the country, so I had to spend it before returning home. If you have visions of palatial homes and expensive clothes, think again: it only equated to about $600 dollars. So I simply paid my hotel and bought Christmas presents. I kept one bank note as a memory (see above), it is now worthless, but even then it was worth (much) less than a cent. A very literal case of "not worth the paper it is printed on" ;-) 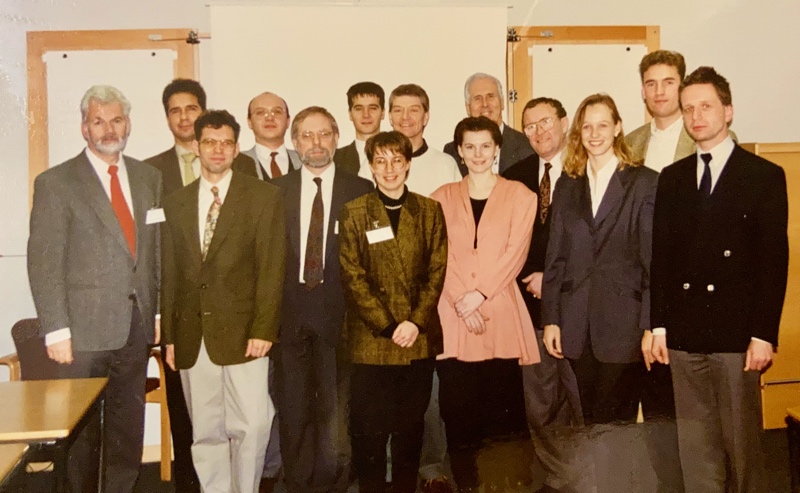 I even found a group picture of the 1994 doctoral colloquium at which I presented my PhD proposal. It is strange to see famous IB academics looking so young. Apart from John Dunning they were all in their late forties to mid-fifties, younger than I am now! There is Danny van den Bulcke (far left), Jean-Francois Hennart (5th from left), Stephen Young (in the middle in a white sweater) and John Dunning (towering over me, I am the one with the light orange jacket). For more pictures of the early generation of IB scholars see: Seven EIBAians in search of an author.