Editorial board members of academic journals are often considered the gatekeepers of knowledge, because they have significant influence on what is published and, hence, what informs theory development, research and practice (e.g., Braun & Diospatonyi 2005; Raelin 2008). Therefore, editorial boards should be sufficiently diverse in their backgrounds to facilitate the publication of manuscripts with a wide range of research paradigms and methods (Özbilgin 2004; Feldman 2008).

A decade ago, we embarked on a large-scale study of gender and geographic diversity in editorial boards of Management journals (see Metz & Harzing, 2009, 2012; Harzing & Metz, 2012, 2013). This short paper looks in detail at the development of gender and geographic diversity over time for the International Business community’s flagship journal: Journal of International Business Studies (JIBS).

For our main research project we collected data for 57 journals for 1989, 1994, 1999, 2004, and 2009. Five-year gaps in the data collected were chosen to allow time for changes to occur, while generating enough data points over the 20 year period studied. For JIBS, we supplemented this analysis by collecting yearly data from 2000 onwards, initially until 2011, with an update in 2017 to include 2012-2017 data. The composition of editorial boards was taken from the first issue of the year in question and all editorial board (EB) members were coded for country and gender.

The country was determined based on the EB member’s current university affiliation. Obviously, this coding method does not always accurately reflect the nationality of the EB member in question, as many academics work in a country different from their country of origin. However, we assume that embeddedness in particular networks would be based as much on current location as on the academic’s country of origin. Moreover, without collecting detailed information on the actual career histories and networks of all editorial board members, it would be impossible to establish whether current or home country networks are stronger.

Size of the editorial board

Immediately apparent from Figure 1 is the rapidly increasing size of the JIBS editorial board. Between 1989 and 2006, the size of the editorial board has increased five-fold, from 30 to nearly 150 editorial board members. In particular, substantial increases took place in 1994, 1999, 2003 and 2005. In most cases, these coincided with a (recent) change in editorship. However, the board increased also by 40 members mid-way Arie Lewin’s term.

Figure 1: Increase in size of the JIBS editorial board over time 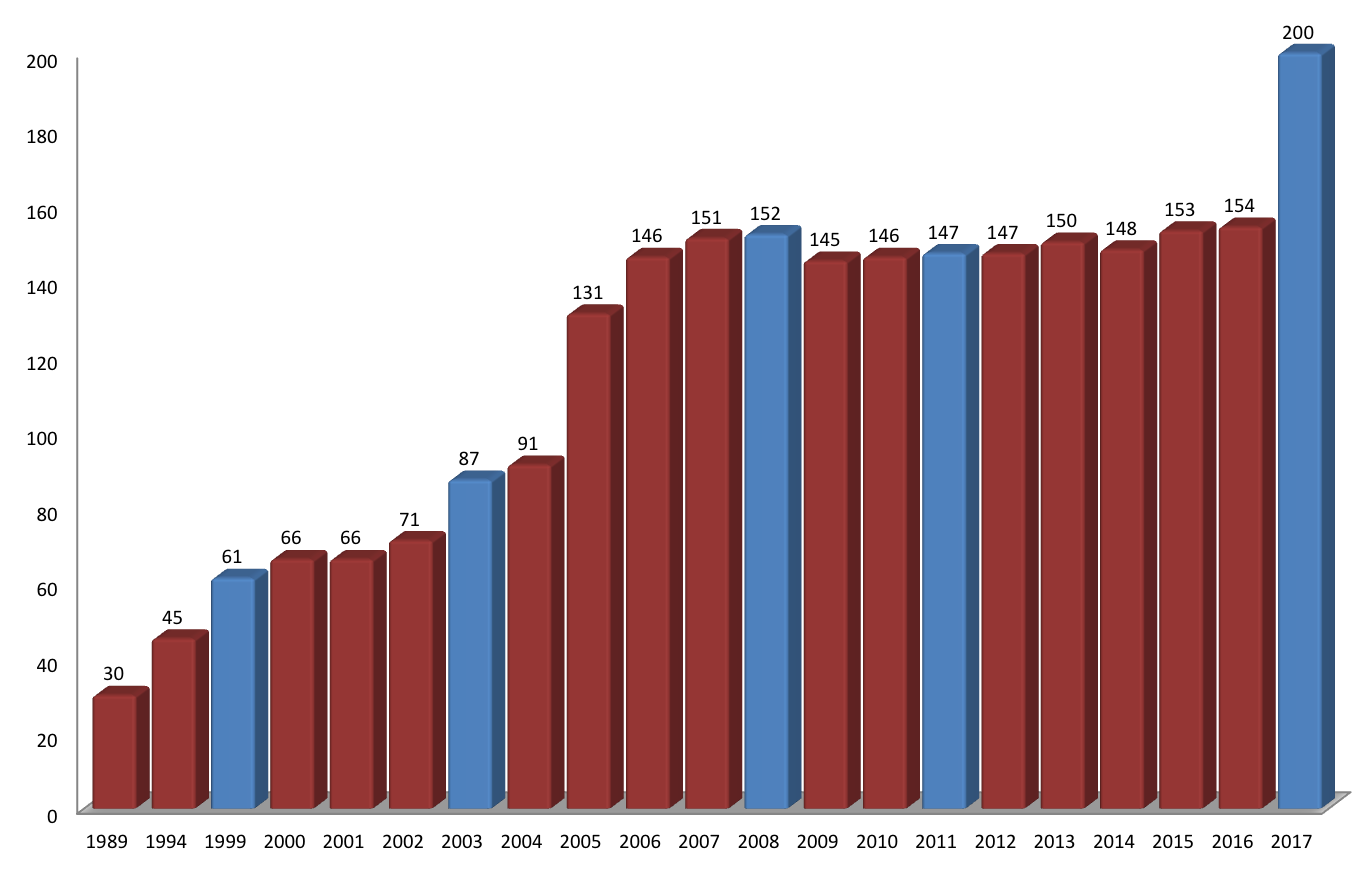 In 2009 JIBS had the 10th largest editorial board in our sample, placing it in the company of journals such as Strategic Management Journal, Academy of Management Journal, and Management Science. Most mainstream management journals seem to have large editorial boards, no doubt to cope with the large and increasing number of articles submitted to these journals. After more than a decade of hovering around 150, the EB size again increased very substantially to 200 with the most recent change of editorship.

In terms of geographic diversity Figure 2 shows that the proportion of non-US board members at JIBS has more than doubled over time, from just over 26.7% in 1989 to 48.3% in 2009 and 56.5% in 2017. In 2009, the last year for which we have comparative data, JIBS had a lower proportion of US editorial board membership than nearly all of the 38 US-based journals in our sample. Only International Studies of Management & Organization (ISMO), Journal of World Business (JWB) and Industrial Marketing Management (IMM) had lower proportions of US board membership.

ISMO has always had a very geographically diverse editorial board, probably reflecting the long-standing editor’s European heritage. JWB has substantially increased its geographic diversity since 1994 (when it had a 100% US board membership). We suspect that one of the main reasons for this increase at JWB is due to the decision made in 1999 by the new editor-in-chief to appoint associate editors not only for content areas, but also for geographic areas (Asia-Pacific and Europe). In the case of IMM, the large non-US board membership accompanied the substantial increase in the size of the editorial board between 2004 and 2009 (from 96 to 247).

Figure 2: Increase in geographic and gender diversity of the JIBS editorial board over time [black markers signifying a change of editorship]. 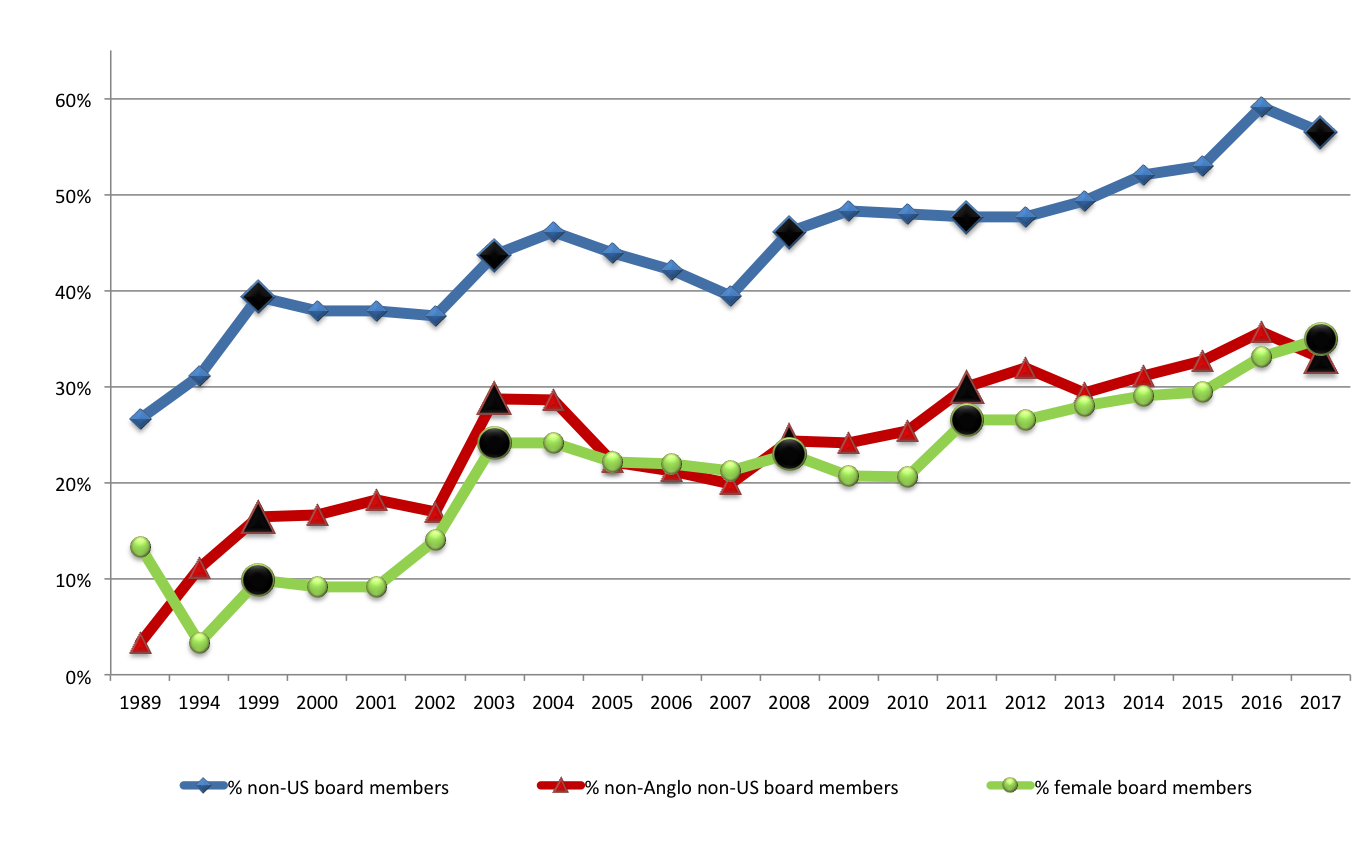 A more fine grained analysis shows that non-US Anglo board members (i.e., Canadian, British, Irish, Australian or New Zealand academics) are - just like US board members - over-represented in the JIBS editorial board when compared to their AIB membership. Therefore, it appears that the major underrepresentation at JIBS is still amongst non-US non-Anglo members. However, many of the non-US AIB members might have joined recently and are likely to be employed at a junior level. Hence, it might take some time before these non-US non-Anglo AIB members qualify for editorial board membership.

Female membership for AIB is not known with accuracy. However, using 2011 and 2017 membership data kindly supplied by the AIB secretariat, we sampled 100 WAIB (Women in the Academy of International Business) members and 100 non-WAIB members. Based on the gender distribution in these groups, we would estimate the proportion of female AIB members to be around 25% in 2011 and 35% in 2017. Hence, the JIBS editorial board appears to be largely representative of the gender composition of AIB membership.

The impact of editors

Under the 2011 editorial team – John Cantwell and Mary Yoko Brannen – we again find a similar pattern: both geographic and gender diversity received a boost. In terms of geographic diversity, the increasing proportion of non-US board membership is particularly notable. Whereas during the prior editor's term, the number of non-Anglo and non-US Anglo board members was fairly equal, in 2011 the number of non-Anglo non-INSEAD board members (42) considerably exceeds the number of non-US Anglo board (27) members. Female editorial board membership reached historically high levels as well. Moreover, for the first time in JIBS’ history, it is now similar to the proportion of female AIB members. Most encouragingly, both geographic and gender diversity continued to increase during this editorial team's tenure, defying the trend found in previous editorships.

In 2017 Alain Vebeke's appointment coincided with a small decline in terms of geographic diversity, caused solely by a decline in non-Anglo board membership. However, it should be noted that this was accompanied by a fairly dramatic increase in the size of the editorial board. Moreover, Verbeke did appoint 10 new non-Anglo non-INSEAD board members, which - in absolute numbers - constituted the second largest increase in JIBS' history. Finally, in spite of this slight decline geographic diversity in 2017 is still higher than at any other year in JIBS' history except for 2016. In terms of gender diversity the new editorship continued the trend of steadily increasing female board membership since 2011.

So far, it is too early to tell whether the gradual decline in non-US board membership and/or female editorial board membership, evident after the three of the four previous changes in editorship, will recur. But even if it does, both the representation of non-US board and the representation of female editorial members have, overall, experienced a significant upward trend at JIBS.

We also showed that editors influence the level of diversity of the editorial board, a finding discussed in much more detail in our most recent publication (Metz, Harzing & Zyphur, 2016). With every newly appointed editor, both geographic and gender diversity increased. Initially, non-US editorial board membership was mainly drawn from Anglophone countries (i.e., Canada, UK, Ireland, Australia or New Zealand) or institutions (i.e., INSEAD). However, under two of the three most recent editorial teams non-Anglo board membership increased dramatically.

Based on our examination of the JIBS editorial board membership over the last 29 years, we draw several broad conclusions and make recommendations. First, in contrast to what Stremersch & Verhoef (2005) find for top Marketing journals, the JIBS case shows that an emphasis on diversity in editorial boards - and as a result diversity in terms of authors - can coincide with achieving high impact. JIBS has consistently increased its relative standing in the field of business and management. Although we are fully cognizant of the many drawbacks of the journal impact factor measure (see Harzing, 2010), it does provide some comparative information on the extent to which the average article in a journal is cited. In 2001, JIBS was ranked 19th in Management and 21st in Business, whilst in 2015 - the latest available year - its position had risen to 18th in Management and 12th in Business. It would have ranked higher in the Management category in 2015 if it wasn't for the presence of several review journals and Psychology journals, both of which traditionally have substantially higher journal impact factors than regular Management journals. Hence, at the same that the JIBS editorial board became more diverse, the relative standing of the journal also increased. Whilst we do not wish to imply causality, it is clear that diversity and high standing can go hand in hand.

Hence, these findings support the case for limiting the length of an editor’s term on the basis that new editors might bring with them new experiences and perspectives that result in positive change. The increasingly high burden on editors through constantly rising submission rates, and the resultant negative impact an editorship might have on their research output (Aguinis, de Bruin, Cunningham, Hall, Culpepper & Gottfredson, 2010), suggests that limiting the length of the editor’s term might be beneficial for the editor’s own professional and personal wellbeing.

Metz, I.; Harzing, A.W.; Zyphur, M. (2016) Of journal editors and editorial boards: Who are the trailblazers in increasing editorial board gender equality?, British Journal of Management, 27(4): 712-726. [Also incorporated into a virtual issue on Gender in Management Research] Available online... - Publisher's version