Do Google Scholar, Scopus and the Web of Science speak your language?

Prior research has shown that Google Scholar has a more comprehensive coverage than Scopus or the Web of Science, especially for scholars in the Social Sciences and Humanities. Most recently, Harzing & Alakangas (2016) showed that, on average, the Web of Science had only 23% of the citations of Google Scholar for the Social Sciences and only 7% for the Humanities. For Scopus the respective figures were only slightly better at 30% and 11%. However, all of the academics in this sample were Associate or Full Professors employed at the University of Melbourne, an Anglophone university that is ranked number one in Australia and ranked 22 worldwide in the Times Higher Education ranking for the Social Sciences. Virtually all of the academics’ publications were in English.

EURAM Symposium on the role of language in academia

When preparing for a symposium at the European Academy of Management dealing with the role of language in academia, I wondered how non-Anglophone academics – publishing mainly in their own language – would fare in these comparisons. I therefore looked at a small sample of academics: two French academics, two German academics, and two Brazilian academics. In my choice I focused on academics in the field of either business administration or organizational sociology. To maximise my chances of finding a significant number of citations, I purposefully selected professors that had a strong reputation in their country and had a significant number of publications. Data were collected in May 2016.

Although I had fully expected that the – mainly non-English language – publications of these academics would be seriously underrepresented in the Web of Science and Scopus, the actual results (see Table 1) surprised and even shocked me. In Google Scholar, the total number of citations for these six academics ran from 3664 to 4837, with h-indices running from 23 to 29. To put these records into perspective: in the same month, the Social Science Full Professors included in the Harzing & Alakangas’ sample – all employed at the 22nd ranked university in the world – on average had 4661 Google Scholar citations and a h-index of 30.

Figure 1: Comparing the average h-index of Anglophone and non-Anglophone scholars across three data-bases 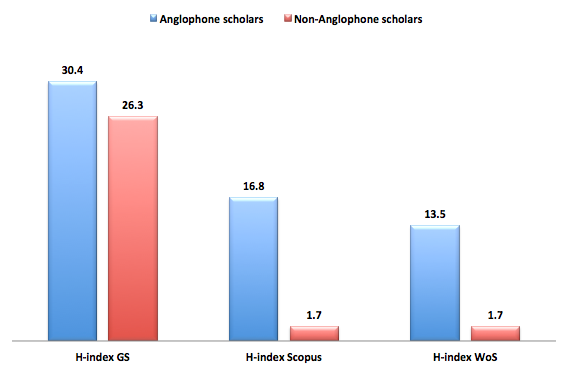 Finally, I looked at the number of English-language publications that made it to these scholars’ Google Scholar h-index and found this to be none for two of them, one for another two, and two or three for the remaining two. Virtually all of their most-cited publications had been published in their own language. From this small-scale comparison we can conclude that whereas Google Scholar is decidedly multi-lingual, “speaking” French, German, and Portuguese (as well as many other languages), both the Web of Science and Scopus are much more mono-lingual English with just a sprinkling of each of the other languages.

I do acknowledge that the vast difference in citations and h-index between Google Scholar on the one hand, and the Web of Science and Scopus on the other hand, is not only related to mono-lingualism. The non-Anglophone scholars also differ from the University of Melbourne scholars in their choice of publication outlets, i.e. they are publishing books and book chapters as well as journal articles.

However, even here language does play a role, given that the recent expansions of the Web of Science and Scopus with book indices tend to focus on English-language books only. Moreover, this does not negate the basic argument that non-Anglophone scholars are invisible in the Web of Science and Scopus, whereas they are well-represented in Google Scholar. So if you publish in languages other than English, only Google Scholar speaks your language proficiently!