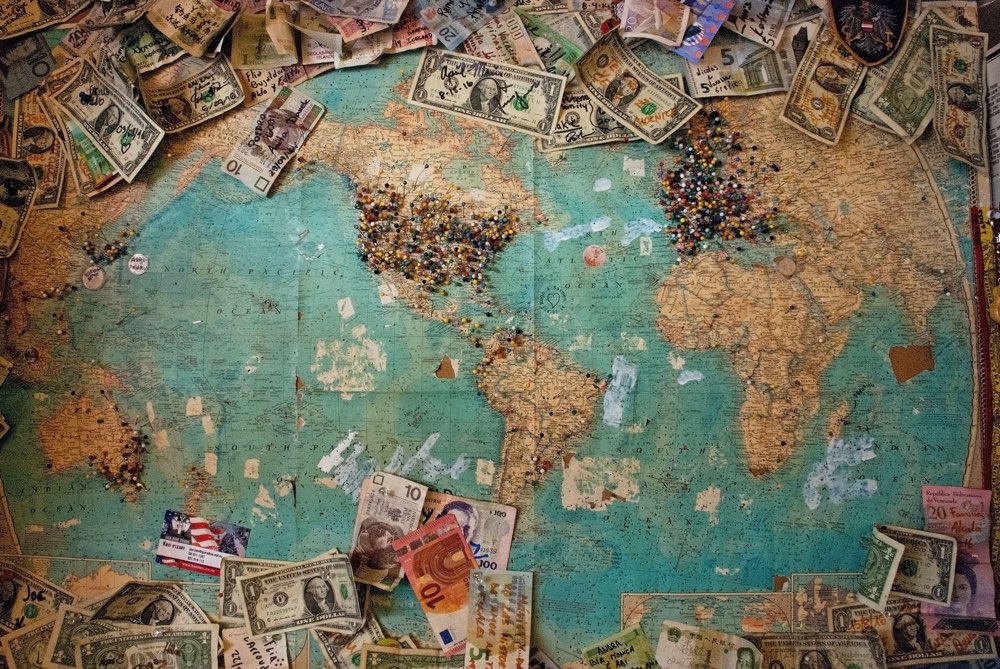 Doing international research is more difficult than doing purely domestic research. Partly because of this, little empirical research has been done in several areas of International Business and Management and various myths have been created. I have discussed several of these myths in earlier blog posts such as Are referencing errors undermining our scholarship and credibility? and Should we distance ourselves from the cultural distance concept?.

There is also a serious lack of research on methodological topics as covered in my posts on the following topics:

Further, as discussed in Replication studies: learning from failure and success IB researchers are even less likely than researchers in other fields to replicate earlier studies. Of course exact replications are almost impossible in IB research as most of our work involves field (rather than laboratory) research and populations. As a result, populations and samples are likely to vary substantially from one study to another. However, I still thought it was useful to test two of the key typologies in International Business: Bartlett & Ghoshal’s typology of multinational companies and Gupta & Govindarajan’s typology of subsidiary roles.

Although I had published articles in other IB/IHRM journals as well as a number of books and book chapters, this was my first publication in a top journal. Hence it still holds a special place in my heart as well as my memory. I can still vividly recall the joy when it was finally accepted and the despair when I was subsequently asked to cut down the article to 7,500 words; it had grown to over 15,000 words in the review process. The final version therefore focused only on corporate strategy, organizational design, local responsiveness and interdependence. It excluded both control mechanisms and human resource practices from the typologies. However, the latter two variables can still be found in the online pre-publication version.

The Bartlett & Ghoshal typology was core to my PhD work and their 1989 book Managing Across Borders. The Transnational Solution was one of the most influential publications in the field of HQ-subsidiary relationships, with over 10,000 citations in both Google Scholar and Microsoft Academic. Although highly influential, their research was based on case studies in only nine MNCs, combined empirical data with prescriptive elements, and did not discuss the characteristics of the various types of MNCs in a systematic way. According to Hedlund and Ridderstråle (1997) empirical grounding of Bartlett and Ghoshal’s study and studies in the same tradition is “sparse and impressionistic, and perhaps colored mainly by the pioneers among the MNCs rather than a more representative sample” (Hedlund and Ridderstråle, 1997: 334). Ghoshal himself (1997) puts it even more strongly: “most of us […] are piling up conceptualization upon conceptualization, unencumbered by […] the discipline of empirical verification.” (Ghoshal, 1997: 362). 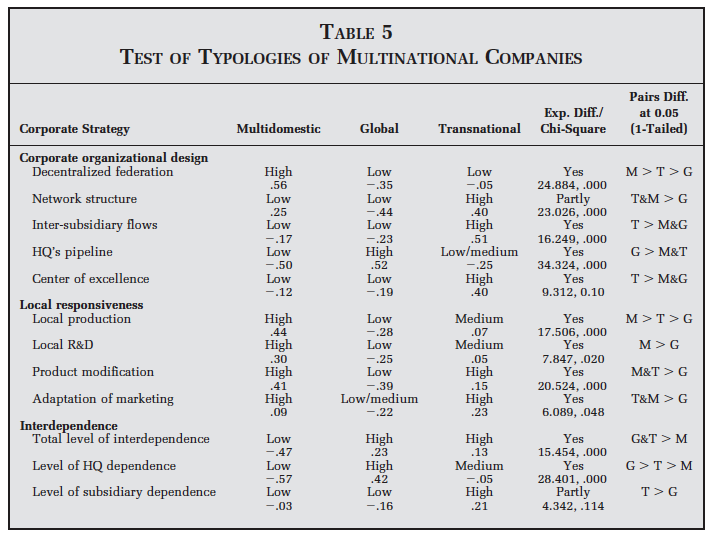 These three groups were subsequently compared on their organizational design and subsidiary roles, their level of local responsiveness – measured as local production, local R&D, product modification and adaptation of marketing – and their level of interdependence with HQ and other subsidiaries. Overall, the results of our empirical analysis provided a high level of support for our hypothesized typologies (see Table 5 above). My results showed that Bartlett and Ghoshal’s typology, based on in-depth case studies of nine MNCs, could be confirmed in a large-scale empirical setting. They also further extended our knowledge about the relationship between MNC strategy, organizational design and subsidiary characteristics, as well as control mechanisms and human resource practices, as can be found in this extended pre-publication version of the manuscript. With well over 600 Google Scholar citations this article is now my fifth most highly cited publication, not bad for a replication!

Whereas Bartlett & Ghoshal’s typology focused on MNCs as a whole, Gupta and Govindarajan’s (1991) Academy of Management Review article proposed a typology of subsidiary roles based on knowledge flows within the MNC. This article has become highly cited, registering well over 2,000 Google Scholar citations. Surprisingly, even though from the 1990s onwards we find a large number of empirical studies dealing with subsidiary roles, the original typology proposed by Gupta and Govindarajan has not been subjected to much empirical verification. Given that this typology has remained so influential even in recent years, it is important to understand whether a subsidiary typology based on knowledge flows is a meaningful way to classify MNC subsidiaries.

As far as we are aware, only Gupta and Govindarajan’s (1994) own study provided a test of the typology. Their study, however, suffered from a number of limitations in terms of both conceptualization and testing of the different subsidiary roles. With my co-author Niels Noorderhaven I therefore addressed these limitations, using data we collected with 169 subsidiaries of nearly 40 different MNCs. Responses for the two types of knowledge inflow and outflow (from HQ and from other subsidiaries) were combined into a composite measure. Following Gupta and Govindarajan (1994), median splits among these two composite measures were used to identify the strategic role of a particular subsidiary in the global MNCs network. The figure below visually displays the mean scores of the four subsidiary types score on knowledge inflow and outflow. As Gupta and Govindarajan indicate, however, a median split might lead to some ‘noise’ in the results as it uses an arbitrary cut-off point. We therefore also conducted a K-means cluster analysis using the four original knowledge measures to verify whether a natural empirical pattern would emerge that confirmed Gupta and Govindarajan’s theoretical model. 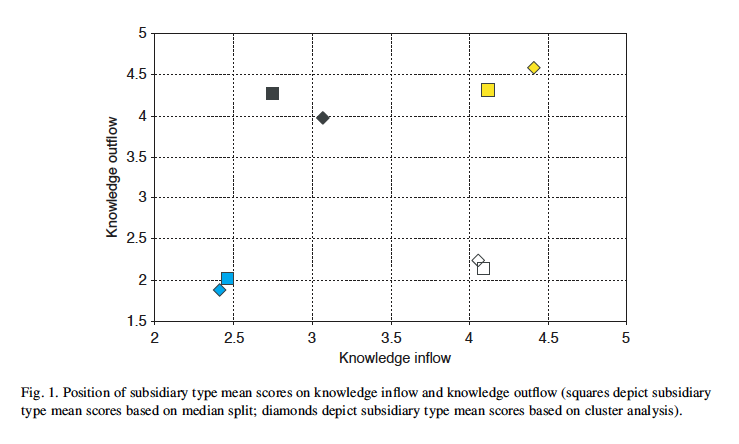 A range of cluster solution from 2 to 6 clusters was attempted. The 2 and 3 cluster solutions resulted in clusters that were differentiated only by low–high or low–medium–high flows and did not separate inflows from outflows. The 4–6 cluster solutions did provide this separation. The four-cluster solution—that is consistent with our a priori theoretical model—reached convergence in a lower number of iterations (5) than the other solutions. It also showed the lowest number of non-significant pair-wise comparisons (12.5%) and hence provided maximum differentiation between the types. The cluster mean scores for the 4-cluster solution are also portrayed in Fig. 1 above. They are rather close to the mean scores based on median-split, but the Integrated Player type shows a more pronounced profile. We provided a further test of the validity of the clusters by examining them for industry-specific and home-country specific effects. This tests whether the clusters truly reflect the existence of different subsidiary roles within the same MNC, rather than a tendency for specific industries or home countries to have subsidiaries with a high level of knowledge inflows and outflows. We found no significant variation in the proportion of industries (chisquare: 6.081, df: 12, p=0.912) or home countries (chi-square: 12.705, df: 18, p=0.809) present in the four clusters. 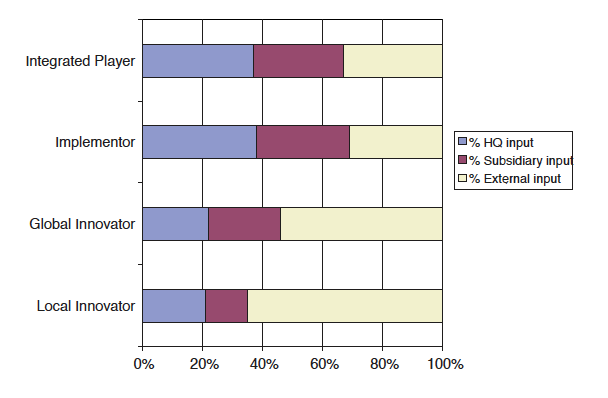 Our results thus showed a high level of support for the validity of the Gupta and Govindarajan typology based on knowledge in- and outflows. However, the specific types of control mechanism used in the different types of subsidiaries in our study differed from Gupta and Govindarajan’s hypotheses. We argued that rather than equating LIs and IPs with regard to their level of autonomy, and GIs and IMs with regard to their level of control by socialization and networks, it would be more consistent with Gupta and Govindarajan’s implied network model of the MNC to differentiate between all four subsidiary types. In our study, subsidiary types were shown to differ as expected on autonomy and control by socialization and networks. As a further validation of the typology, capabilities and product inflows (see figure above) were shown to differ in predictable ways between the four subsidiary types. Overall, this suggests that both the level and direction of knowledge flows is an important factor in differentiating subsidiary roles.