Using Publish or Perish to do a literature review

Note: Since Publish or Perish version 7, the previously separate All of the words, Any of the words, etc. fields are now consolidated into a single Keywords field in order to facilitate transparent keyword searches and literature reviews across data sources.

To conduct a literature review search in Google Scholar (or Microsoft Academic or another data source) you can use Publish or Perish. Depending on how broad you want the results to be, you could use Any of the words, All of the words or The phrase. In Google Scholar, this will match these words anywhere in the resulting publications. If you use The phrase, the words will be matched in the order they were entered.

If you want to narrow down the results, ticking the Title words only box will only provide publications where the words are included in the title. As one would normally expect important publications in a field to include relevant key words in their title, this might be a good strategy.

Let’s assume you would like to know what has been written about the relatively new concept of "born global" firms in international business. Born global firms are firms who start operating internationally from their inception, rather than starting out as domestic firms first and only internationalising gradually. To do so enter "born global" OR "born globals" in All of the words, check the Title words only box. This results in around 400 papers, three of which have been cited more than 1500 times. The screenshot above shows all papers with more than 400 citations.

Sorting the results by year allows us to identify the "founding author(s)" of the concept. Below I have reproduced all articles with born global in the title until 2000; the first publication was in 1993 by MW Rennie in McKinsey Quarterly. The paper talks about a McKinsey study amongst Australian firms that identified small and medium-sized companies that successfully competed against large, established players in the global arena without first building a home base. Hence, a consulting firm in Australia first discovered the phenomenon. 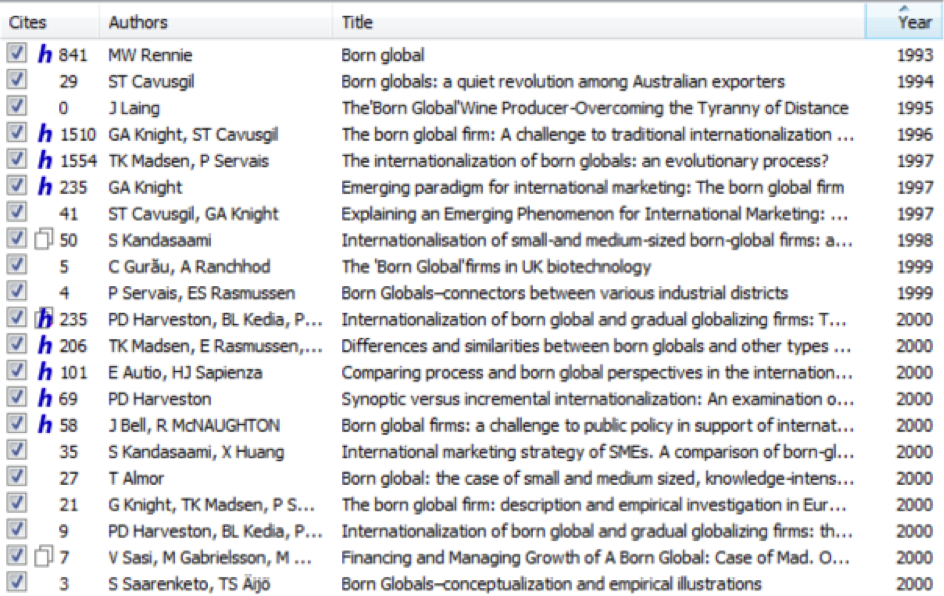 The second publication is an editorial by a well-known academic in International Marketing, who – in the Journal of International Marketing – reports on the results of the McKinsey study that he discovered when spending 6 months as a Fullbright Scholar in Australia. Cavusgil (1994:4) says: “I would like to comment on an interesting phenomenon in the Australian export scene. It is relevant to those of us in other post-industrial economies and, hopefully, should spur some research interests.”

Interestingly, the third publication is also about Australian born globals, this time wine producers. However, even after 20 years, the article hasn’t generated a single citation.This seems to suggest it has not been picked by researchers, no doubt largely caused by the fact that it was published in a rather obscure and specialized journal (Australian and New Zealand Wine Industry Journal). The Australian angle is also apparent in a later conceptual paper by Kandasaami at the University of Western Australia in 1998. Interestingly, this paper did gather nearly 50 citations, despite being an unpublished working paper.

Historical development of the field

Cavusgil took his own recommendation to heart and started researching this phenomenon, leading to a very highly cited publication in 1996 – co-authored with Gary Knight – in the research annual Advances in International Marketing. Both Knight and Cavusgil went on to publish many other papers in this field. They were joined at an early stage by Danish academic Tage Madsen, who, with his Danish co-authors Servais and Rasmussen, published a number of papers on the topic. In 1999, the phenomenon was also picked up in the UK, where Gurau & Ranchhod researched biotechnology firms.

By 2000 the topic had spread to researchers in the USA (Harveston et al.), Ireland (Bell), Finland (Autio, Sasi, Saarenketo), and Israel (Almor). Interest remained strong amongst researchers these countries, but after 2000 they were joined by researchers in Sweden, Portugal, and New Zealand. With the exception of some researchers in the USA and Israel, the phenomenon thus initially attracted most interest from academics in “small” economies at the peripheries of the world. The mid 2000s saw the interest in the phenomenon expand to countries such as Germany, Switzerland, Mexico, Korea, with Latin American countries (Brazil, Columbia, Costa Rica) and Italy joining from the late 2000s.

In the early 2010s the geographical interest had spread to India, China, and Eastern Europe. The year 2012 saw the publication of a Handbook of Research on Born Globals with 18 chapters by different researchers in the field, as well as an annotated bibliography. In 2015, the 2014 JIBS decade award went to Knight’s and Cavusgil’s paper on “Innovation, organizational capabilities, and the born-global firm”. In the same year, Gary Knight published a review article (“Born global firms: Evolution of a contemporary phenomenon”) in Advances in International Marketing. It appears that after 20 years, the topic of “born globals” has reached maturity.

Your literature review will discover the seminal publications in the field. These could be publications that are highly cited or publications that deal with exactly the topic you are interested in. Normally, you will want to ensure that you also review papers citing this seminal piece of work. These papers will often show up in your initial search, but if they look at the phenomenon from a different angle and don’t refer to the exact same concepts, they will not be captured.

So how can you use Publish or Perish to follow up on publications that cite your seminal publications? Simply right-click on the seminal work and chose Lookup citations in Publish or Perish. This will look all referring works and present them ordered by the number of citations. The screenshot below shows the ten most highly cited articles that cite the first publication on born globals (Rennie 1996). Of these, six were already included in our initial search, as they have born global in the title.

Of the remaining articles, those by Alba et al. and Quelch & Klein are probably not very relevant. However, the publications by Rialp, Rialp & Knight and Jones & Covielo appear highly relevant, even though they do not mention the terms born global in the title.

Searching Microsoft Academic in Publish or Perish from version 5 onwards

From version 5 onwards Publish or Perish allows for searching Microsoft Academic as a data-source. This provides you with several features that make doing a literature review even easier.

Watch an interview on the Publish or Perish software