Compete or cooperate: does it depend on the language?

Shows how using the English language might prime competitive behaviour

This article is one of my personal favourites for two reasons. First, it gave me a chance to work together with Arjen van Witteloostuijn whom I had known for more than 20 years, first as my lecturer during my studies in Maastricht and then as my Head of Department during a brief 2-year span working at Maastricht University in the mid nineties.

Second, its conclusion – that the use of English instead of Dutch increases the proportion of competitive choices by Dutch students – potentially has very important consequences. This is certainly an area in which I would like to do more systematic research across a wide range of countries and languages. If only the funding organisations would agree :-)

The paper proved to be rather difficult to publish and went to three journals before it ended up at Management International Review. Most reviewers seemed to be psychologists who were unhappy with the fact that the design wasn’t fully experimental, i.e. we could not randomly assign students to the “lived in Anglophone country” condition. One of them also posed the – in our view fairly ridiculous – condition of a control group of US students who were fluent in Dutch to test the reverse effect. He/she didn’t seem to realise that finding such a group in the USA as such is already nigh on impossible; finding it in a single university is probably less likely than being struck by lightning.

We investigated the behavioral impact of exposure to a culture other than one’s own and showed that cultural accommodation by living in another culture has a long-lasting, but partially dormant, influence on behavior, which can be activated by using the language associated with this culture as a priming mechanism. More concretely, in this study 348 Dutch students played a prisoner’s dilemma game – operationalized as two firms competing in the same market – as an integral part of their studies. In the game they were asked to make a cooperative or competitive price-setting choice. We also asked students a wide range of questions, including questions about previous exposure to Anglophone cultures. 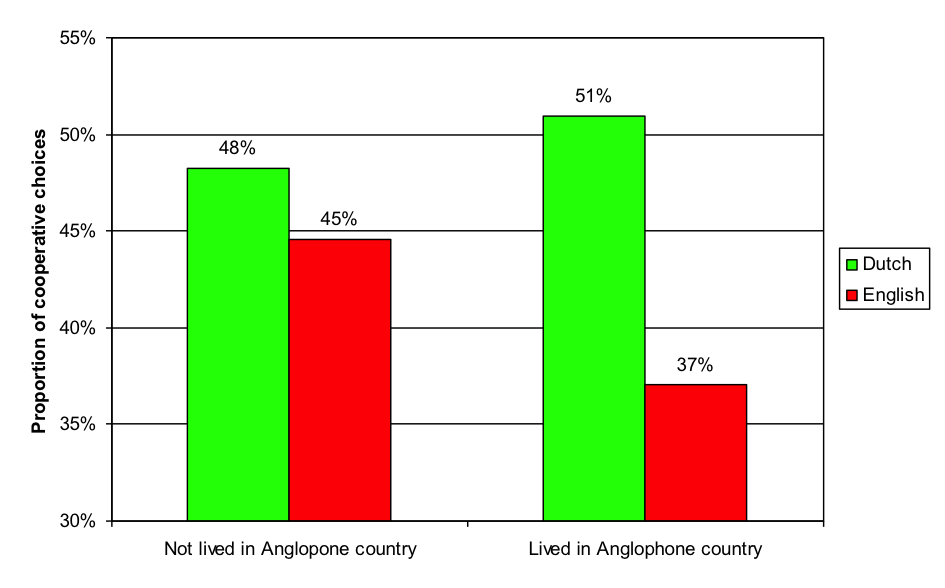 We found that previous exposure to an Anglophone culture with higher values for masculinity, performance orientation and assertiveness negatively influences cooperative behaviour in a prisoner’s dilemma game when the game is played in English. In addition, we found that the use of English is an influential factor in itself: it elicits competitive behaviour even when an active cultural imprint is not present. The figure above visualises the interactive effect of these two conditions and shows that for those students who had lived in an Anglophone country for at least three months, playing the game in English reduced the proportion of cooperative choices from 51% to 37%. With the increasing use of English as a lingua franca, these preliminary results suggest that Anglophone-dominated globalization may well have potentially far-reaching consequences for international business.

Attitudes to business concepts in Taiwan

During a visit to Taiwan in 2013 to give a keynote speech on language barriers and HR implications at the International AHRD Asia Conference, I took the opportunity to do another – very small-scale – test of the same basic hypothesis. I randomly distributed a questionnaire to Taiwanese English language teachers in two languages (English, Mandarin). It included 10 concepts related to business on which respondents were asked to indicate whether they saw the concept as more negative (1) or positive (10). There were 54 responses, 20 in English and 34 in Taiwanese.

The sample size (esp. for the English language questionnaire) was too small for meaningful conclusions and the administration too messy (just before my lecture with some confusion as to who could participate and how to distribute the language versions). However, the results below might be useful as background for future studies in terms of the concepts that are most likely to show a language effect. They also seem to provide further support for the cultural accommodation effect in that - as in the Dutch study - the use of English was associated with a more positive view on competition. They should not be used as evidence without further analysis. 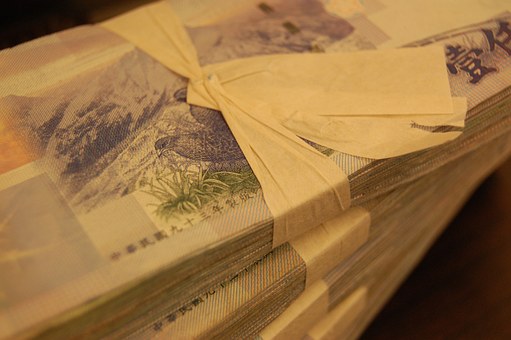 Of the concepts included only risk and cooperation showed a significant difference between the two versions when controlling for gender, age, English language skills and value similarity to birth culture. Risk is seen as more positive in English, whereas cooperation is seen as more positive in Chinese. Both results are as expected according to traditional Chinese values including collectivism and uncertainty avoidance.

I also attempted to reduce the 10 concepts to underlying dimensions and there was a fairly clean result. Cooperation, leadership, trust and team loaded together with negligible cross-loadings. The same was true for risk, time, competition and shareholders. The first set of concepts is related to human interaction and collaboration, the second set are more business/efficiency related.

A free pre-publication version of this paper is hyperlinked. If you’d like to have an official reprint, just drop me an email.